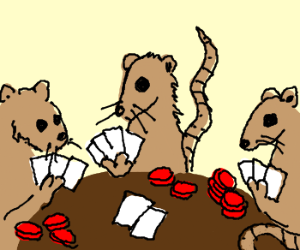 An experiment conducted by American scientists in rats was trying to answer the following question: can we control or cure/decrease the problem gambling with drugs?

At the head of the study, Paul Cocker, in collaboration with researchers from the University of British Columbia. The results of the study were interested in several media outlets such as Business Week and PokerFuse.

The aim of the study was to better understand the brain function of gambling addiction. As is often the case for this kind of study, was used to rats.

The study took place over 16 months while 32 rats were placed in conditions similar to those of a player addicted to gambling and who would be in a Las Vegas casino.

Scientists have even recreated the same mechanism as the levers of slot machines (the levers that you pull to activate the machine). They have set up two levers with three lights and pieces of sugar (sugar here, which replaces money as you may have guessed).

Rats were therefore free to activate either of the two levers, then wait before three diodes in the hope that each will eventually ignite. That mice are rewarded (with sugar), it was necessary that these 3 lights.

Researchers, with this experience, noted that rats were similar to human reactions when they had situations almost winning (when 2 of the 3 lights are lit).

To heal, the researchers have managed to block dopamine D4 receptors (for the curious, you can read more on the subject on this Wikipedia page) with medications. This block helped alleviate addictive behaviour.

Even though the study seems to be a success with the rats (in the sense that there is a drug), can we conclude that he will be similarly to humans and that drugs can cure anyone of the expenditure to the game? It is obviously far too early to draw conclusions.

For those who want to read more on the subject, you can consult the article published on the website of the UBC University.

Discuss this news on PokerCollectif forums: drugs to reduce the dependence on the game?