Halo 5: Guardians Campaign Behind the… 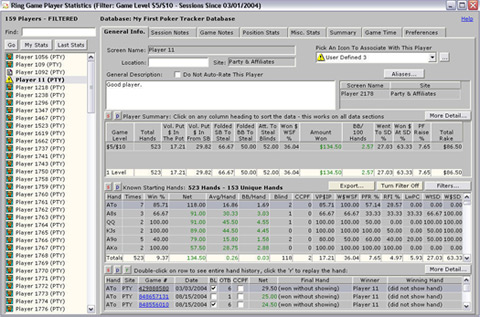 The "Ring Game Player Statistics" displays in real time and provides a summary of all known data for all sessions, against all the players you've played against. This window is an important tool to learn to see weaknesses in his game Plus, you'll get the inside information on players that you play against.

The left side of the window, you will see a list of all the players against whom you have played over there see your own name. Browse just have the scroll bar to see the desired player. If you have a lot of players in the list, in the white box above, simply type the first few letters of the name of the player to go directly to its statistics. When the correct name is displayed in the white box, type "enter" or click "Go" to see the statistics of the player in question.

The "My Stats" button allows you direct access to your statistics. For it to work, you must have told PT what is your user name in the "Preferences" tab. (See also the tutorial on the Preferences tab. "

The "Last Stats" button allows you to go directly to the last player you viewed.

The number of players will be shown at the top of the white box and will vary according to the filters you put in the "Preferences" tab. (See also the tutorial on the Preferences tab. "If such a filter is active, you will see the word" FILTERED "to let you know that not all players in the database that are visible.

This tab allows you to enter a description (notes, etc.). Player and assign an avatar. The notes are part of the large white box and will of course be saved when you next visit.

By default, all players have the same avatar. To change the avatar of a player, go to his statistics and choose an avatar from the dropdown under "Pick An Icon To Associate With This Player" menu. You can also give custom names to avatars. To do this, click the "..." to the right dropdown menu selection avatars. You will see the following window. Click OK to save the new labels. 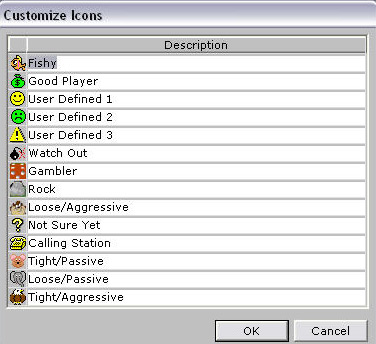 You change the description of a player or his avatar, do not forget to save the data by clicking on the disk icon in the top of the window. If you wish, you can activate the "auto-save" option in the "Preferences" tab not having to manually back up data every time.

Option "Do Not Auto-Rate This Player"

Pokertracker can automatically assign an avatar to players according to their statistics. (See the tutorial 'Automatic Classification players' about it). If the automatic classification of players is enabled, you have the option to exclude one or more players (eg you) process. For example, if you know a player is a fish, to be certain that PT does not change his avatar to something else, uncheck the box.

Another function of the main screen is the ability to add aliases for players. For example, if you are "Joe123" on PokerStars and "Joe456" Party on, you must specify that PokerTracker is the same player so you can see the combined statistics. It is therefore essential that you create an alias for each poker account you have.

Although creating such an alias, site statistics are combined, it is possible to filter statistics by site in the "Preferences" tab. (See also the tutorial on the Preferences tab. "So there is no advantage to not create an alias for your different accounts.

You can also do the same for other players. It is not often available for a given unknown players, but if you often play with your friends, you can also assign aliases to bind all their accounts.

You can have as many aliases as you want. Also, note that it is required to create aliases even if your user name is the same if two different sites. For example, if you be "Joe123" on PokerStars and "Joe123" Party on, you still need to create an alias, if PT does not combine the two players.

By clicking on the "Aliases ..." you will see the following window. 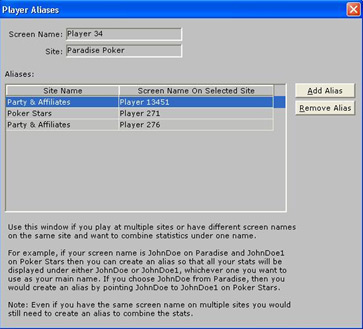 To add the alias, simply click the "add alias" button. A new row will be added to the table on the left. In the first column, choose the poker site that you want to add an alias, then choose the name right. When you close this window, the statistics page will be updated to reflect the changes. It is also possible to remove aliases in the future.

When you click the "more details" button at the bottom of the screen you will see the following window. 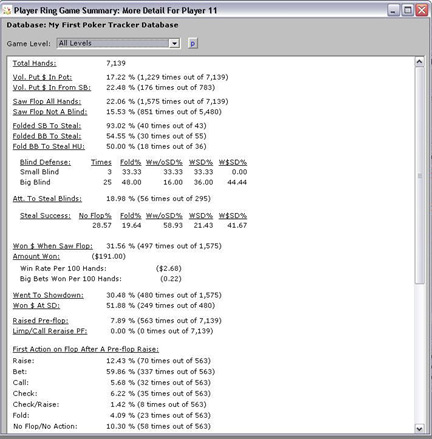 This feature gives you yet more statistics on players. At the top of this window, if you want, you can put a filter limit by choosing a menu level vis-à-vis "game level".

Player actions (actions of the players)