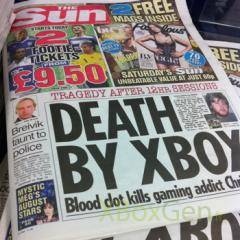 Recently, the British newspaper The Sun has published a that a young man of 20 years from Sheffield died to have played the Xbox 360.
He spent several hours a day sitting, to play including Halo.
Parent comment: "in both parent, don't you think that playing computer games can make him evil because you know what it is. Children across the country play these games for long periods, they do not realize that it could kill them. Chris lived for his Xbox. He arrived there in a game for hours and hours, sometimes 12 hours of affiliate. "He loved play online Halo against other people everywhere in the world."
The medical examiner confirmed that deep venous thrombosis (DVT) was originally from pulmonary embolism that killed the young man. The DVT is a blood clot that develops in the legs or lower torso after long periods of immobility.
We knew that to remain seated to play video games too long hours was harmful to health, but at this point?
If we talk about this story, it is obviously that there is a link to do with poker players who play generally, sitting behind a computer.
Recently, a Medical Billing and Coding publication published an article titled: "Sitting is killing you" with as subtitle "The truth about sitting down". According to this publication, sit more than 6 hours per day increases your risk of mortality by 40%, even if you do precise exercise article.
A little alarmist is not it? This publication is credible? Exaggerated?
According to a study of Medicine & Science in Sports & Exercise, when you spend sitting more than 6 hours per day, your risk of having a heart attack increases by 54%, which is not nothing.
With these figures, one understands why many poker players seek to train and exercise. There is also a thread on our forums which deals with this subject.
In this regard, in an interview with the magazine Bluff, Viktor Blom aka Isildur1 has answered the question: "what is it makes you to have lost several million dollars in no time"? [it is us who adapt]: "at the beginning it is a bit, but then we forget. And it must be said that during this perdiode, I was not as in shape physically than before. I was going over to the gym as I used to do, and I ate more as well".
Obviously that there are links to. A healthy mind in a healthy body. The physical form has a certain impact on the quality of our game as a poker player. A player in form (to name only this benefit) will be much less sensitive to the tilt (which, as we know, is the Achilles heel of several players).
The reading of these few lines, I think it is important to be aware that as a poker player, it is imperative to move and do not sit too long. You can make some simple changes to your schedule. It is surely possible to cut your days of grinding in 3 sessions of 2 hours if you absolutely want to play 6 hours per day. You can also take a little longer breaks. If your environment allows it, you can even play a few standing hands once per hour.
If exercise is an excellent thing, taking a few extra precautions is not a luxury.
Discuss this news on PokerCollectif forums: play poker could kill you