One of the most difficult decisions in poker is to deal with a big raise with a medium strength hand. It is easy to play a bad or a good hand. But it is the average hand that will separate the pro of the amateur player.
Play a hand of force average when there was a raise preflop to no-limit hold'em

One of the most difficult decisions in poker is to deal with a big raise with a medium strength hand. It is easy to play a bad or a good hand. But it is the average hand that will separate the pro of the amateur player.

I'll give you as an example, one hand played on the Internet by one of my students at a table of 5$-10$ no-limit Hold'em ' em. A player in middle position opens at $ 35. The other players fold up my student. He had $ 500 in front of him (he should have more, but it will be the topic of another article) and decides to caller with a pair of ten blacks (Ts - Tc).

The other players fold and the flop fell Q-9-4 Rainbow. Naughty takes the lead by betting $ 70 on the flop in a pot of $ 85. My student should folder, caller or raiser? And you should know that there is no information on his opponent.

In many cases, especially when playing at his local poker club, issues of style and image at the table will be very important. For example, suppose that you are the only woman at a table filled with supermachos trying to bluff every pot. Thus, you would probably as caller and let enrich you it with their bluffs. Or suppose you're a young punk that everyone suspected to be a maniac and let us also assume that you bluffiez on each hand you play. Well you want here no doubt raiser for all your opponents you call up the River with as high!

I did not need to tell you that you should adapt your game to your opponents playing style and the image you project on the table. But this article is more concerned with know what you need to do in the absence of such information - in other words, wonder about the best poker of base to adopt. Sometimes, especially when you play on the Internet, you have no information on your opponent and you have to play basic poker.

Let's go back to our original question which was whether what our hero should do with its ten. Will he call, it must induce an another bluff on the turn by minimizing its losses if he faced a big hand, he will give the possibility to his opponent to hit a card on the turn that will beat it or he may hit one of his two outs that would give him a set. If it raise, he could be beaten on a bad card at the turn, but it could also scare a hand like 7-7 or A - 5 matching - hands with few outs, but with which his opponent could consider the possibility of a bluff on the turn or river. Will he fold, it reduced its losses on a more or less interesting flop for him and it passes to the next hand.

So, what is the best game? In my opinion, the only way to answer this question is to make a few assumptions about how the typical player plays, put some figures on these assumptions and make some calculations.

Let's start with the easiest to calculate. EV (Fold) = 0

I had told you that it would be easy. Now, let's go with the other two.

To calculate EV (call), I'll make a few educated guesses on the range of hands that our adversary can have and how it will be able to play this range of hand on the turn. We know that he opened in middle position, so let's give him a range reasonable: 4 - 4 +, A - 10, K - Q, K - Js, Q - Js, J - Ts, T, 9s. I put it on just about any pair, a well accote ACE, k, q, and a few connectors matching. Now, how the action of the flop reduced his range of hands? According me, this only reduces not many. Most players make their continuous updates with their range of hand full in a situation like this. (This approach is not the best in no-limit hold'em may be discussed in a future article). But give credit to our opponent and delete A - T, 5-5 and 6-6 his range of hands saw action on the flop. It makes no difference what hand I eliminates my analysis as long as we keep in mind that our opponent will not build each flop when it will be raisé preflop.

OK, now that we have it, it's time to make an educational forecast on what could happen on the turn if we callons. A reasonable game for our opponent would be a monster, some of its trash hands and some of his hands mean, but also bet on a bluff, a semi-bluff, on some of his monsters and a few big hands that are not the monsters (such as AA) checker. Suppose that he check with top set and middle set, but implementation still with the small set. Suppose that he bet by providing caller one raise with A - A, check providing caller one put with A - Q and K - K and setting for folder on a raise with K - Q and Q - Js. Suppose that it semibluff with A - K, K - Js, J - Ts, T - 9 s. And just for fun, let's make it a pure bluff with A - J, 7-7. If an ACE or a King falls on the turn, assume that it will build its range integer. Obviously, these assumptions do not describe perfectly no player, but in my opinion, this is a fairly good approximation of how the typical player could play so this analysis is useful.

What happens with our hero? Well, it call on the flop to induce a bluff on the turn unless a brick falls at the turn in the case where our hero callerait also. Forget the river for a moment and consider the EV for a call.

There are 47 cards possible at the turn. Four of them are ACEs and TT has almost no equity when ACE hit. My student is ready to lie on any implementation if he sees an ACE out. Four of the possible cards at the turn are kings. These are more difficult to play, but are not good maps for our hero. For reasons of simplicity, assume only that he lies down facing a bet if a King on the turn. On any of the other cards on the turn (39% of possible maps) it callera again.

Obviously, the ten are a much better hand with a 2 at the turn if it is a valet, even though our hero provides caller in 2 cases. But I will use only the 2 on the turn to calculate equity. The fact that I give no chance to my student to win if an ACE or a King comes out at the turn should not affect much the calculation I'll do even though, in reality, he will win the pot sometimes, even when one of these two cards will be released. In addition, this calculation does not more equity give when a 10 comes out at the turn. I underestimated his equity rather than the overestimate.

So here is my prediction on this point...

We have not done an analysis of the River, but the action at this point will often be check-check (I is therefore not considering fluctuation of this number). It is clear to me what a call on the flop, and significantly, a better game than a fold. But is that anyone is surprised at the result? Very few players will want to sleep 10-10 on a standard continuation bet on a flop of Q-9-4 Rainbow and they would be right to play as well. The real question here will be whether it is better to caller or raiser? You will know if you read my next column where I will consider the matter in a little more depth. 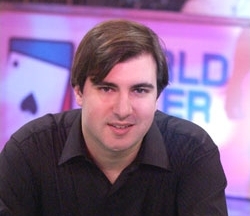